‘Tonight is the final event from our Burton Peace 100 project which has been commemorating the centenary of the end of the First World War by remembering the sacrifices made by so many across the globe, by celebrating the diversity of our community today, and by standing together as one people united for peace in our land and across the world’.

A wonderful evening of music, song and memory to duty and bravery.

Below are some of our readings, thoughts and reflections, during the evening…

“Peace cannot be built on exclusivism, absolutism, and intolerance. But neither can it be built on vague liberal slogans and pious programs gestated in the smoke of confabulation. There can be no peace on earth without the kind of inner change that brings man back to his “right mind.”
Gandhi

“Peace begins with a smile..”

“If we have no peace, it is because we have forgotten that we belong to each other.”

“What can you do to promote world peace? Go home and love your family.”

“I alone cannot change the world, but I can cast a stone across the waters to create many ripples.”
Mother Teresa

“We can’t love the whole world. But we should remember that God has placed us in a specific community at a particular time. We’re called to love those around us. Loving them means serving them, and in doing so we become the best citizens.”

Decide to be peaceful
by Robert Muller

Do not listen to the warmongers,
hate seeders and power-seekers

Switch on and keep on, in yourself
the positive buttons,
those marked love,
serenity, happiness, truth,
kindness, friendliness,
understanding and tolerance

And sing in unison with all humanity

“Let there be peace on earth
and let it begin with me.”

My Soul, there is a country
Afar beyond the stars,

Where stands a winged sentry
All skilful in the wars;
There, above noise and danger
Sweet Peace sits, crown’d with smiles,
And One born in a manger
Commands the beauteous files.
He is thy gracious friend
And (O my Soul awake!)
Did in pure love descend,
To die here for thy sake.
If thou canst get but thither,
There grows the flow’r of peace,

The rose that cannot wither,
Thy fortress, and thy ease.
Leave then thy foolish ranges,
For none can thee secure,
But One, who never changes,
Thy God, thy life, thy cure.

On one occasion an expert in the law stood up to test Jesus. ‘Teacher,’ he asked, ‘what must I do to inherit eternal life?’

‘You have answered correctly,’ Jesus replied. ‘Do this and you will live.’

But he wanted to justify himself, so he asked Jesus, ‘And who is my neighbour?’

In reply Jesus said: ‘A man was going down from Jerusalem to Jericho, when he was attacked by robbers. They stripped him of his clothes, beat him and went away, leaving him half-dead. A priest happened to be going down the same road, and when he saw the man, he passed by on the other side. So too, a Levite, when he came to the place and saw him, passed by on the other side. But a Samaritan, as he travelled, came where the man was; and when he saw him, he took pity on him. He went to him and bandaged his wounds, pouring on oil and wine. Then he put the man on his own donkey, brought him to an inn and took care of him. The next day he took out two denarii and gave them to the innkeeper. “Look after him,” he said, “and when I return, I will reimburse you for any extra expense you may have.”

‘Which of these three do you think was a neighbour to the man who fell into the hands of robbers?’

The expert in the law replied, ‘The one who had mercy on him.’

Jesus told him, ‘Go and do likewise.’

Nothing More Than Nothing
Author unknown.

Tell me the weight of a snowflake”, a coal-mouse asked a wild dove.

“Nothing more than nothing”, came the answer.

“In that case, I must tell you a marvellous story,” the coal-mouse said.

“I sat on the branch of a fir, close to its trunk, when it began to snow — not heavily, not in a raging blizzard — no, just like in a dream, without a wound and without any violence. Since I did not have anything better to do, I counted the snowflakes settling on the twigs and needles of my branch. Their number was exactly 3,741,952. When the 3,741,953rd dropped onto the branch — nothing more than nothing, as you say — the branch broke off.”

Having said that, the coal-mouse flew away.

The dove, an authority on this since the time of Noah, thought about the story for awhile, and finally said to herself, “Perhaps there is only one person’s voice lacking for peace to come to the world.”

In Memoriam [Ring out, wild bells] by Alfred Lord Tennyson, 1849

Ring out, wild bells, to the wild sky,

The flying cloud, the frosty light:

The year is dying in the night;

Ring out, wild bells, and let him die.

Ring out the old, ring in the new,

Ring, happy bells, across the snow:

The year is going, let him go;

Ring out the false, ring in the true.

Ring out the grief that saps the mind

For those that here we see no more;

Ring out the feud of rich and poor,

Ring in redress to all mankind.

Ring out a slowly dying cause,

And ancient forms of party strife;

Ring in the nobler modes of life,

Ring out the want, the care, the sin,

The faithless coldness of the times;

Ring out, ring out my mournful rhymes

But ring the fuller minstrel in.

Ring out false pride in place and blood,

The civic slander and the spite;

Ring in the love of truth and right,

Ring in the common love of good.

Ring out the narrowing lust of gold;

Ring out the thousand wars of old,

Ring in the thousand years of peace.

Ring in the valiant man and free,

The larger heart, the kindlier hand;

Ring out the darkness of the land,

Ring in the Christ that is to be.

With proud thanksgiving, a mother for her children,

England mourns for her dead across the sea.

Flesh of her flesh they were, spirit of her spirit,

Fallen in the cause of the free.

Sings sorrow up into immortal spheres,

There is music in the midst of desolation

And a glory that shines upon our tears.

They went with songs to the battle, they were young,

Straight of limb, true of eye, steady and aglow.

They were staunch to the end against odds uncounted;

They fell with their faces to the foe.

They shall grow not old, as we that are left grow old:

Age shall not weary them, nor the years condemn.

At the going down of the sun and in the morning

We will remember them.

They mingle not with their laughing comrades again;

They sit no more at familiar tables of home;

They have no lot in our labour of the day-time;

They sleep beyond England’s foam.

But where our desires are and our hopes profound,

Felt as a well-spring that is hidden from sight,

To the innermost heart of their own land they are known

As the stars are known to the Night;

As the stars that shall be bright when we are dust,

Moving in marches upon the heavenly plain;

As the stars that are starry in the time of our darkness,

I pledge to use my words to speak in a kind way.

I pledge to help others as I go throughout my day.

I pledge to care for our earth with my healing heart and hands.

I pledge to respect people in each and every land.

I pledge to join together as we unite the big and small.

I pledge to do my part to create peace for one and all.

General Walter Congreve of the North Staffordshire Regiment, to his wife on Christmas Day 1914.

Darling dear – as I cannot be with you all, the next best thing is to write to you.

We have had a “seasonable weather” day – which means sharp frost & fog & never a sign of sun. I went to church with 2 of my battalions in an enormous factory room & after lunch took down to the N. Staffords in my old trenches at Rue du Bois Mother’s gifts of toffee, sweets, cigarettes, pencils, handkerchiefs & writing paper.

There I found an extraordinary state of affairs – this a.m. a German shouted out that they wanted a day’s truce & would one come out if he did; so very cautiously one of our men lifted himself above the parapet & saw a German doing the same.

Both got out then more & finally all day long in that particular place they have been walking about together all day giving each other cigars & singing songs. Officers as well as men were out & the German Colonel himself was talking to one of our Captains.

My informant, one of the men, said he had had a fine day of it & had “smoked a cigar with the best shot in the German army, then not more than 18..

What our project visitors say!

‘Just been to Burton Peace 100 service at All Saints. It was exceptional. Everyone who took part did an excellent job and those behind the scene who worked hard to organise it Thank you. Looking forward to all the activities to celebrate the 100 years since the end of WW1.’

‘Thank you for a great night.’

‘Well done everyone. Clear message of God’s care throughout. Thank you.’

‘Brilliant Day, very interesting. Well done to all who helped, including food’

‘Very, very good, all aspects were brilliant. What a lot of hard work must have gone to getting it all so interesting. Everyone must be congratulated.’

‘Great variety and lovely to see so many different people here.’

‘A very enjoyable day, one to remember.’

‘An amazing day. Fantastic to see faces old and new.- Journey’s End- a very poignant and reflective time of the day.’

‘An excellent day full of information and food. Speakers were very interesting and shared good knowledge. Thank you.’

Thank you to all who have supported us and made this project possible.

To our neighbours, church members and strangers who have come along to events. To those who have helped to organise and contribute to events, from cleaning, to cooking, giving talks, sharing research, sharing news, delivering Christmas cards and every job in-between.

Special thanks for the Heritage Lottery Fund who have funded our project and made our work possible.

God’s Peace be with you all.

Our community of Faith… 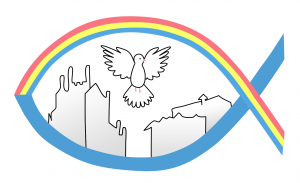 Our web site, built and sponsored by…